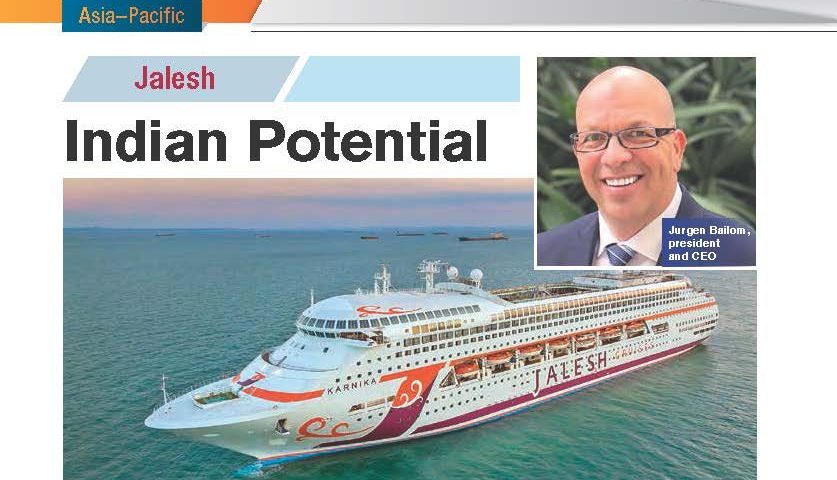 The Karnika launched operations for Jalesh Cruises in April, targeting the potentially huge source market in India. “We are infusing the experience of ‘Incredible India’ with international hospitality for guests in India as well as in the Middle East,” said Jurgen Bailom, president and CEO. “We will keep focusing on both these aspects as we sail to new destinations soon.”

After 15 short cruises from Mumbai, the ship spent the summer season in the Red Sea. Four-night cruises over the summer were roundtrip from Dubai, calling in Abu Dhabi and Bahrain. There were also five-day itineraries, with a day at sea and calls in Muscat and Khasab, while a three-night cruise spent a day at sea and called in Bahrain. “The ship will return to Mumbai in September 2019 and sail to Indian ports until December before we head to international ports again,” Bailom said.

Essel Group, an Indian conglomerate, is behind the new brand. Headquartered in Mumbai, Bailom is overseeing the operation and has tapped the Apollo Group to handle the hotel operation and catering and Bernhard Schulte Cruise Services to run the marine side of the 1990-built Karnika. The ship was previously the Pacific Jewel, and the company took the handover period as an opportunity to drydock earlier this year. Among the changes, the casino was rebuilt to provide card games appreciated by Indians, Bailom explained. The kids play area was redone and a spray park area was built along with two swimming pools. “Given the preference for multi-cuisines by Indians, the restaurants were revamped to offer a variety of gourmet meals,” he said.

Working closely with Apollo, the food and beverage product has been tailored to the local market. “Food preferences have been customized. Apart from that we have eight different food stations to offer a range of cuisines along with three fine dining restaurants to offer Indian, Thai, Malay, Chinese, Korean, Mongolian, Taiwanese and Japanese food,” continued Bailom. Other target areas include the MICE market for Indian companies, and weddings. “Indians love to host their weddings in the most unique way possible,” Bailom explained. “The Karnika has kept these sensitivities in mind. In fact, it is the only ship that can conduct a traditional Indian wedding, including the Pheras.”

Eventually, Bailom expects the Indian market to grow to around 4 million cruisers annually by 2030. “Infrastructural overhaul of ports and relaxation of taxes will play a key role in pushing growth,” he said. “We are also estimating a surge in cruise-based destination weddings and personal ceremonies to fuel growth. “Our brand is designed and customized especially for the Indian audience and also for the foreigners visiting India to experience the flavor of Indian culture, food and hospitality.”

Any cookies that may not be particularly necessary for the website to function and is used specifically to collect user personal data via analytics, ads, other embedded contents are termed as non-necessary cookies. It is mandatory to procure user consent prior to running these cookies on your website.